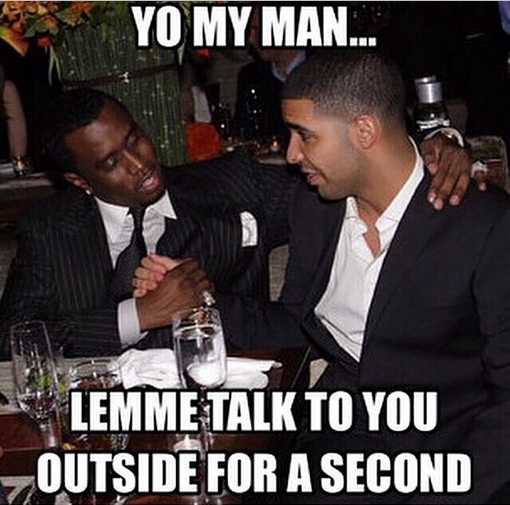 Well I posted a stat last week about the past year being pretty tumultuous for myself, but I re-thought that thought yesterday as more obstacles were hurled in YMCMB...artists(?) path.  Drake fans everywhere sat in shock as they first watched their TLs fill up with news of how hip hop mogul P Diddy punched Drizzy outside of Club LiV in Miami.  After alot of gossip and rumors about it being over Cassie things finally cleared up as today as it seems the punch occured over the 0to100 beat (and/or maybe concept) which was given to them both as a #team (Im guessing) 8 months ago.  Drizzy(being typical"") ended up saying fvqq it after not hearing nothing from Diddy and did it on his own accords.  When Diddy(being typical"") approached Drizzy about the situation, Drake was typical Drizzy and played it like whats done is done, and thats when time stood still for a moment.

Now if you've been up to date then you know after a hot summer its looking like a cold winter for the YMCMB squad as things seemed to have been avalanching since October when Tyga originally threatened to leak his own album, followed by Lil Twist's tweets about Young Money Management being worst ever...in history.  Things continued to escalate as Tyga went on a rant-page going public about his dislike personally for Nicki & Drake.  Aside from Drake's social media flirts w/ Tyga's female friends, from what I can tell neither of them made a big response(if any) toward their labelmate but Baby said he sensed jealousy and that Tyga was either in or out. The way the situation set up tho...he out.

Before that could settle in tho, Wayne went public with his discontent for his label, & that the whole situation (YMCMB) was just fvqq'd up.  Really surprising after all they've been thru (Wayne & Baby)...but it also has to make you wonder.  These guys are really smart, almost too smart too let situations like this go public one after another after another like that.  Its only creating momentum for either a Great divide or maybe surprise in which everyone(including Manny Fresh,BG, Turk, Juvenile) comes back together for a Greater Good...hey ya never know.  What you think???