December 21 marked the change in the music scene. Dwain M. Jiles aka Billy Dollaz started his rise to power as the game of hip hop was born he started listening and absorbing everything. By the time he reached high school he had already developed his writing skills thru creating short stories and poems that had a startling reflection on real life. At the age of 16 he began to freestyle with a group of friends and discovered that he had a raw talent and an ear for good music. Although he was dealing with street life he managed to stay out of trouble. By the age of 22 he was ready for the big time. He and childhood friend inked a record deal with Warlock Records, under the group name Tango & Cash. As Tango began to record their first album differences arose that caused the group to part ways. After the split Billy Dollaz was on a mission to regain the momentum lost by the group splitting. He went on to finish his first solo album. Due to shady dealings by the record company and other entities he still sat in the waiting area of signed musicians and eventually waited out his contract. During the wait he managed to work with some very important people within the music industry. Including Coptic of the Crazy Cat Productions team along with advice from artists like Tracey Lee, Derek D-Dot Angeletti during the period he was being managed by Kim Holland. As well as Young Zee, Pace Won and Rah Digga of the Outsidaz as well as Tame One of the Artifacts. His drive and the diversity of people he has work with has made him a one of a kind artist. Now he has returned to the music scene he has began to work on his newest solo effort with producers from every tier of the business. Producers from this project include the Drum Majors, Supah Shane, Miguel Vasquez, Rob Lb Dorsey and many others . With a team of Billboard topping, Grammy winning, Artist and producers on his current project , along with a movie debut with 1.6 mil views, Billy Dollaz is sure the revive Hip-Hop Genre. 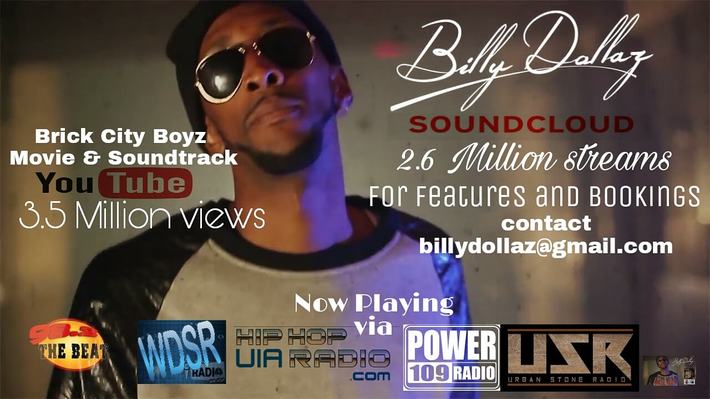