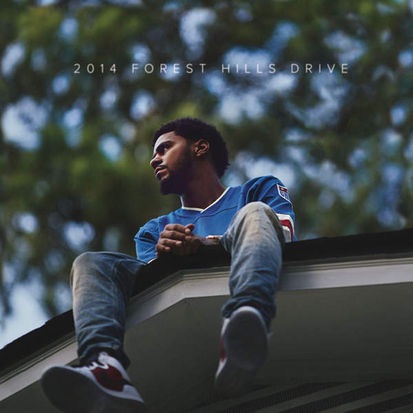 2k14 is being reported one of the worst years for hip hop album sales ever, with no albums appearing in the To 40(unless you count Pharell as a hip hop artist whose album came in 15). J. Cole was the only artist to break gold thus far with sales of 350k his first week. With all the other artists that dropped albums last year you're like, "Is hip hop really getting that bad?" Well #YourFavoriteBlackGuy took a Sunday drive to the iTunes store to see if hip hop had really gotten that bad or was the economy just f*#k'd up?

So 1st lets talk about why I picked the albums I picked. All of the artists execpt for one (Kid Cudi) I had never listened to before but were interested in hearing their albums. They also had albums that ppl around me were talking about, and I have an eclectic following to say the least. Ok say lets get down to it, since I'm familiars with Kid Cudi so we'll go ahead and discuss his allbum first

Cudi went with the no promo tactic that several artist went with this year when they released their album. "Satellite Flight: Journey to Mother Moon" was released on iTunes with barely a lead single. As I stated before I’m a huge Kid Cudi fan so I was eager to hear this one, especially because I didn't know about it. After a quick scan of the cd I was disappointed honestly, but all true fans of any artist know you can't just rule out an album after just one listen so I gave it another full spin. The album is actually an EP that Cudi explains as a link between Indicud & Man on the Moon 3. Cudi kept the vocals simple on this one and to a minimum making it more of an emotional experience rather an album. It starts out on a bright note and gradually gets darker but ends on a silver lining* The highlights of the CD for me are the first actual song(Going To The Ceremony), and the last one(Troubled Boy), which makes you want more, but unfortunately you gotta wait until the next album:( If you're not already a Cudi fan then I wouldn't recommend it for you as I'd say its not his best work IMO, but hey if you just let it ride then you may totally get into it as I did.

TDE released at least three albums last year and Isaiah Rashad's "Cilvia Demo" EP was one of them. The name of his project is honestly what drew me in, and when I saw that he was with TDE I thought to myself yeah he has to be worth a listen. I pressed play and at 45 seconds I started the CD over again. The intro (Heredity) was amazing to me, had me eager to hear the next track. Again I was blown away by the production, there's a euphoric..90s type feel to his beats and I can definitely say his beat selection is crazy. His flow wasn't bad either, but IMO the actual content is what made the CD a bit lackluster to me. Im big on lyrics, messages & themes, so like I said the name made me wonder why Cilvia? Wanted to listen to the project rather than research why he named it that, & found no real connection. Some of the songs I feel didn't even have a real connection amongst the verses; rather a bunch of lyrics that displayed wittiness and wordplay but didn't say anything as a whole. I have no doubt that he'll get better with time but this one didn't make me a fan, maybe next time :(

Ab-Soul, possibly one of my new faves dropped his album "These Days" early 2k14, and after his project Soul Control I was really eager to hear it. Though I found it not better than Soul Control it was still very impressive. Felt comfortable letting the album play-through without wanting to skip any tracks. He did have a few songs(Hunnid Stax, Sapiosexio, Twact) on this album that I felt like he dumbed it down a bit to pertain to a larger audience but they weren't bad records, there's enough solid material on the album to over-ride that anyhow, and it brings the album full circle in a way that you’d have to listen to to understand. All in all I'd say Ab-Soul gave us another great album containing dope production with substantial lyrical content; and when you pair the two, you can never go wrong.

From my 1st time hearing Schoolboy Q I knew he'd be a problem. 1st song I heard from him was Hands on the Wheel, followed up by Blessed and from that day on I was like...Yeah(head nods). So when I heard about Oxymoron I knew it'd be dope. Naw he may not be as lyrical as Kendrick Lamar or Ab Soul but the way he mixes his wittiness and wordplay with G-Fonk is ridiculous! This is another one you could just put in and let it ride all the way through; possibly best album of the year. Think of DPG in their prime rolled into to one person, over a beat selection thats amongst the likes of his fellow TDE conglomerates and you have Schoolboy Q's Oxymoron in a nutshell. As far as highlights he released 7 visuals from the album and they are all knockers so you take your pick. Did I also mention that it debuted at #1 on Billboard in its 1st week?

Last but certainly not least we have J. Cole. Up until now I had never been a fan of Cole; his songs always just seemed kind of bland to me, until I heard Crooked Smile and was impressed. The track made me want to hear a few more track maaybe, but not check out the album, so when I first heard about Forest Hills Drive I didn’t even lift my head. Then one day while listening to Pandora several weeks ago, I heard his track No Role Models and it stuck with me...for some days. After hearing about how good the album was doing, and how good it was I had to check it out for myself. He converted me. Again, another artist with a beat selection that seemed 90s inspired which made me tune in to give the lyrics a listen. Cole definitely has substance which boosts his replay value and the fact that he did it with no features shows his ability to stand on his own, giving him mega kudos since hes still kinda green. The album is a really smooth listen transitioning from one track to the next perfectly. If I was forced to choose a fave it’d have to be Love Yours, really hope he releases some visuals for it! #OfficiallyAFan Well that about raps this up, feel free to leave comments if you have any rebuttals, wanna share views, or think there’s someone that I should look into. I’m always looking for good new music besides mine!